We have 11 guests and no members online 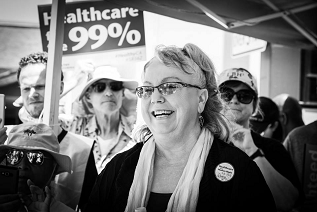 The Peace and Freedom Party endorses Gayle McLaughlin for the position of Lieutenant Governor in California’s 2018 statewide election.

A former mayor of Richmond, Gayle was a leader of a progressive coalition that took on the Chevron Corporation and passed a new rent control law in her town. She is running as an independent.

The following is her official statement upon receiving PFP endorsement.

I am the former two-term mayor of Richmond (2007-2014) and a founder of the Richmond Progressive Alliance.

I am corporate-free and running for Lieutenant Governor to organize anti-corporate forces in every city throughout the state and to stand in Sacramento against corporate corruption and backroom deals, and to promote an agenda based on one concept: People First!

Visit the Gayle McLuaghlin for Lt. Governor website at GayleForCalifornia.org.