We have 8 guests and no members online

Statewide Coordinated Actions To End Solitary Confinement (SCATESC) began Monday, March 23, 2015, and are now continuing on the 24th of each month.

When: The 24th of every month
Where: for locations and times, please see the Prisoner Hunger Strike Solidarity website
What: local events to protest solitary confinements in California prisons
Sponsors:

The Peace and Freedom Party endorses these events. 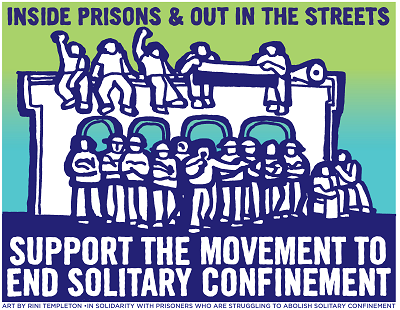 The following call to action was released by the Prisoner Hunger Strike Solidarity Committee in March 2015.

Statewide Coordinated Actions To End Solitary Confinement (STATES) will start Monday, March 23, 2015 and will happen on the 23rd of each month. This date emphasizes the 23 or more hours every day that people are kept in solitary confinement.

The actions will acknowledge the importance of organized, community-based pressure as a core strategy (along with courts and legislators) of our work outside the walls to end solitary confinement.

These coordinated actions respond to The Pelican Bay State Prisoner Hunger Strikers’ Proposals for action from members of the Short Corridor Collective, based on meetings on November 12-13, 2013. They stated:

We want to consider the idea of designating a certain date each month as Prisoner Rights Day. On that date each month prisoners across the state would engage in peaceful activities to call attention to prison conditions. At the same time our supporters would gather in locations throughout California to expose CDCR’s actions and rally support efforts to secure our rights. We can see this action growing from month to month as more people inside and out become aware of it and join our struggle.

We will focus on CA statewide actions now, ask for solidarity actions nationwide and internationally, and possibly build up to a national day of organizing against CA Department of Corrections and Rehabilitation (CDCR) at the state capitol in Sacramento, CA.

Each locale participating in the Statewide Coordinated Actions will decide their locations and the time of day/night. We suggest places and times where and when there are plenty of people so that the actions are visible, and we can reach people with leaflets/information. If people-heavy locations also happen to be strategic for other reasons (e.g., a CDCR parole office in a busy area), all the better.