We have 343 guests and no members online

by Tom Condit; this article was originally published in Partisan issue no. 25, printed May 2008.

In late April, a court ruling postponed the "Checkmate" spraying. Judge Paul Burdick of the Santa Cruz County Superior Court ruled that the LBAM infestation is not an "emergency" that would justify proceeding with spraying while completing the environmental impact report. The EIR must be completed before spraying continues.

Several members of the Legislature have responded to public pressure by introducing bills that would stop the LBAM spraying. And Governor Schwartzenegger has promised Marin County officials that spraying would not resume before August 17, 2008.

Spraying opponents have until mid-August to bring a permanent halt to the spraying program and force state officials to adopt a sensible replacement strategy to deal with the LBAM.

The Peace and Freedom Party opposes aerial spraying of urban areas to attack infestations of the Light Brown Apple Moth. We believe the spraying is unnecessary, inefficient, unlikely to succeed, and potentially threatens the health of humans and other animals. Many local governments and community organizations throughout California agree.

The Light Brown Apple Moth (Epiphyas postvittana, LBAM for short) is native to Australia. In the past 100 years, it has been introduced to New Zealand and other Pacific islands including Hawai'i, as well as Britain and Ireland. In March 2007 the LBAM was positively identified across hundreds of miles of California from Los Angeles north to Napa. Officials of the California Department of Food and Agriculture (CDFA) panicked.

The CDFA response was a program of aerial spraying of a mix of chemicals. The key component of the spray was tiny capsules of pheromones, the sexual attractants female moths put out to attract males. The idea is to confuse the males so they fly around in circles thinking there are females everywhere, and fail to fi nd actual females to mate with. Pheromones are highly specific (that is, they attract members of one species or its close relatives only) and are a preferred way of controlling insects because they don't do damage to other animals or plants.

CDFA's spraying program, begun in Monterey and Santa Cruz counties and planned to be extended to several others, used a spray mixture called "Checkmate." Checkmate contains synthetic LBAM pheromones mixed with several other ingredients, including ones know to be cancer-causing or irritating to skin and eyes. Other ingredients have never been tested for their effects on human or other animal health. The CDFA says none of these ingredients are in large enough amounts to pose any threat to humans.

Because Checkmate is a "proprietary" (privately controlled) formula, we don't know the proportions of its different ingredients, which would be the only way to verify the claim of harmlessness. Moreover, CDFA estimates of potential harm are based on the notion that the spray will be land evenly and uniformly across the entire area sprayed. This is unlikely to happen at any time in the real world.

We need to operate on the "precautionary principle." That is the principle that you don't do something which is potentially hazardous. Profi t-driven science looks to economics for its guide. We need to look at human welfare for ours.

Is the LBAM a threat? 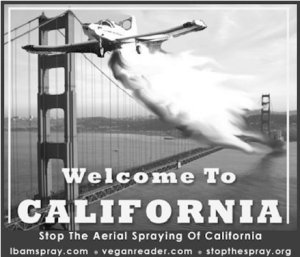 The LBAM is a signifi cant pest on crops in Australia and New Zealand. It is known to eat leaves, twigs and fruit of nearly all types of fruit crops, ornamentals, and vegetables.

But the real economic threat CDFA fears isn't the actual value of damaged crops. It's restricted trade with other countries due to U.S. government classifi cation of the LBAM as a "noxious insect." This means the U.S. will embargo produce coming from anywhere the LBAM is found in order to keep it out of this country. As a result, Canada and Mexico have slapped embargoes on produce from the ten California counties where the LBAM has been found. If they didn't, and the LBAM got into their countries from here, the U.S. might embargo their produce. This circular political process has the potential of shutting down all exports of California agricultural goods. When the CDFA talks about "potential losses" from the LBAM, they're talking about trade losses rather than actual physical losses.

Can LBAM be eradicated?

The spread of exotic plants, animals and microorganisms is an inevitable part of the capitalist world market. Movements of people, animals, and produce bring with them soil, insects, plants and diseases.

The spread of alien life forms by commerce and tourism is speeded up by global warming and made more dangerous by monoculture (the practice of planting huge areas with one kind of plant for farming purposes, which makes them more vulnerable to attack by disease and insects than a natural mixed community would be). All this means that we will continue to see new insects, new noxious plants, new diseases. Can we spray for them all?

It's clear from the geographic range of the Light Brown Apple Moth in California that it is unlikely to be wiped out by any CDFA program. The problem will keep coming back. We need to learn to live with it rather than fantasize about military victory over it.

Instead of expensive high-tech responses to problems like the LBAM, we need approaches based on what is called "integrated pest management " (IPM), using a variety of means to control the situation as best we can, using things like pheromone traps and baits, bacterial foes, parasitic insects. We also need to live with "ugly" fruit which has surface damage from insects but is perfectly okay inside.

In the long run, we're not going be able to effectively deal with rapid ecological change unless we get rid of the capitalist market system that causes parts of it and exacerbates other parts. Only when science is placed in the service of the peoples of the world rather than corporations and governments can we make rational solutions.

Tom Condit was the 2006 Peace and Freedom Party nominee for Insurance Commissioner.