We have 74 guests and no members online

At the press conference held by Peace and Freedom party candidates on February 15 in Sacramento, PFP’s nominee for California governor in 2018, Gloria La Riva, delivered the following statement. 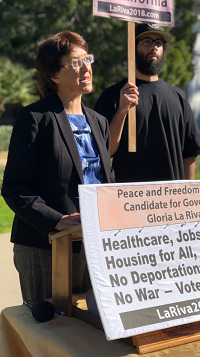 California, the most populous and in many ways the richest state in the country, California, among the 10 largest economies in the world, is experiencing a deep crisis.

It is a crisis for undocumented immigrants across this state, and their millions of family members, who even if they are not undocumented, are still victims of this very racist, brutal war being waged against the immigrants. Today, this very day, there are people being arrested, at work, at home, at school, ripped apart from their families, jailed and deported, leaving behind children. We demand full rights and immediate legalization for all immigrants. The Democrats only like to talk about the Dreamers, but those Dreamers have parents subject to deportation, there are youth who don’t qualify for DACA.

Yes, in the midst of astounding wealth, with skyscrapers rising higher, multi-million-dollar condos, Californians are facing a crisis, sleeping under bridges, in doorways of empty buildings, even mothers with infants are homeless in a state where there are more than enough unoccupied homes to house everyone.

It is a crisis for the 125,000 Californians in prison and jails, suffering from excessive sentences, abuse, many locked away in isolation, in a prison system where the poor are locked away, in a prison that provides no meaningful rehabilitation, that pays pennies an hour for their labor. That’s called slavery. And then, for the majority who are released, they have no money, no home, no job, who get out into society with the stigma of a prison sentence.

It is a crisis for Black and Latino and poor white communities beset by police brutality and an epidemic of killings. Of the hundreds killed in California, only one cop comes to mind who served time, Johannes Mehserle, and that was only for several months, for murdering Oscar Grant.

It is a crisis for the mentally ill, who we all see in the street, who desperately need help, but there is none, because that is not the job of this system, not taking care of the people, no.

No, the driving force of this system is profit, and it is causing an ever-deeper crisis for the vast majority of 40 million people in California.

Today we are here to announce that Peace and Freedom Party is running candidates in statewide races for the June 5 primary. It is not a campaign in the traditional sense. This is a campaign to fight for the interests of the people, to say Enough is Enough!

Our program offers the only real answer for the people.

Number One: The landlords have lorded over us for too long. We call for a ban on evictions, to begin to undo the damage that State laws have done to tenants. We call for the overturning of the Ellis Act and the Costa-Hawkins laws, that are designed to maximize profits for landlords and real estate developers. We call for the prosecution of the bankers who illegally gave sub-prime loans and then foreclosed on thousands of people’s homes. There are still people whose homes are being repossessed, and they are still forced to continue paying the mortgage!

We demand the cancellation of all tax breaks to all the war profiteers, like Northrop Grumman, Lockheed Martin, who make billions in profits. Stop tax breaks for major coporations that are siphoning desperately needed revenue for cities like Anaheim. Why are the politicians in Anaheim providing up to $200 million in infrastructure for Disney’s billion-dollar industry?

Stop the corporate welfare to Facebook, Twitter, Uber, Google, Amazon, to all the banks – We say enough!

Instead of squeezing our meager checks with more and more taxes, for less services, there would be a huge surplus from taxing the rich, to create jobs, jobs in construction, free childcare, senior care, jobs to create more schools, and to fill those schools with more teachers and assistants, to build community centers, there will be plenty of money for apprenticeships for youth, to fund free eduction in the state university systems.

With true people’s representatives in office, so much could be done. Today, the politicians could do so much to reverse this crisis. But that is not their interest. Their pockets are lined with campaign dollars from corporate lobbyists.

That’s why, in the middle of drought, agribusiness still rules in Sacramento and has unlimited water rights, while communities go completely dry in the Central Valley.

In California, at least 25% of the people spend 67% of their income on rent.

In San Francisco, the median rent is $4,000 for one bedroom! You can thank the legislators in Sacramento for that.

The reality is that the rich are going to keep getting richer, the landlords will continue to evict, will keep jacking up the rents.

The capitalists’ endless search for the maximization of profits is why more people want to know about socialism, because they know that capitalism is the source of their crisis.

Peace and Freedom proposes not only a people’s program today, but a complete radical turning over of the stystem to one that truly meets people’s needs in a sustainable way.

Socialism in the United States would mean a home for everyone, free universal healthcare, including mental healthcare; it means free childcare, free senior care, free education; it means not just taxing the corporations and banks, it means expropriating them. Socialism is full equality and respect for people of all nationalities, *finally* equality for women, enough of this war on women today! It means full respect for the LGBTQ community.

As a candidate for governor, I am excited to be running. We will travel from the border with Mexico to the border with Oregon, east and west, to every community, to say, we would love your vote, but more than that, let’s join together: We are not each other’s enemy. The president, the right wing, the captialists want us to think that, want to divide and conquer the working class – haven’t they been doing that for eons?

The odds are stacked against us for sure. The elections in this system are meant to keep the capitalists in power. Just the existence of the highly-undemocratic Prop. 14 means that Peace and Freedom and other third parties are knocked out of the general elections. Our campaign will not go beyond June’s primary. They make the rules of their game.

But our power comes from the people, the people have the power to turn things around. History has shown that the struggle of the people is what brought progress, whether it is social security, civil rights and the end of segregation, or labor unions.