We have 54 guests and no members online

Police abuse in the Central Valley

by Fresno Peace and Freedom Party; this article was originally published in Partisan issue no. 21, printed September 2005.

Two cases of abuse by Central Valley police were in the news recently.

In federal court in Fresno, Judge Anthony Ishii ruled that the shooting death of Everardo Torres of Madera was accidental.

During the investigation of a noisy party in October of 2002, Everardo Torres was arrested, handcuffed, and put into the back seat of a Madera police car. A short time later, police officer Marcy Noriega came over to the car that Torres was in, pulled her service revolver and shot him to death.

Noriega says it was all a big mistake, she thought she was using her Taser gun. The Torres family and the community believe that the shooting was intentional. And so does John Crockford, co-chair of the Fresno County Peace and Freedom Party and a retired law enforcement officer with 25 years of experience.

"She knew what she was doing"

"The evidence shows that Officer Noriega knew exactly what she was doing. The position of her firearm and the position of the Taser precludes the unintentional drawing of one or the other. When you factor in the officer's training and a handcuffed suspect, there can be no other conclusion than an intentional shooting." said Crockford.

The Torres family, friends and community groups will continue to fight for justice in this case and to "end the war on black and brown." The Reverend Floyd Harris said the National Action Network will be filing complaints with the Department of Justice in Washington, D.C. and will be asking for an investigation into the Madera police department.

In local court in Fresno, felony assault charges against 11-year-old Maribel Cuevas were dropped after intense community and media scrutiny of the actions of the Fresno Police Department revealed a number of abuses.

Arrested the evening of Friday, April 29, 2005, Maribel, who speaks limited English, spent five days in juvenile hall with just one half-hour visit from her parents. She then spent about 30 days under house arrest, forced to wear a GPS ankle bracelet to monitor her whereabouts.

Defending herself against a stone and water balloon attack by seven boys (one of whom admitted starting the fight), Maribel was thrown to the ground and arrested for throwing the same stone that was thrown at her. A total of six police officers (and a police helicopter hovering overhead) were involved in this incident. She was never questioned or spoken to before the arrest which took place in front of her mother.

Condoning the abusive behavior of the city's police department. Fresno Mayor Autry stated "I commend the Police Department and the action they've taken."

For information about the fight to end police abuses in Fresno and Madera counties, you can contact: 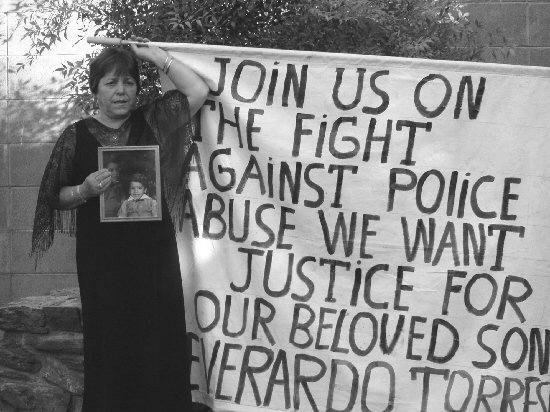