We have 134 guests and no members online

“A familiar face in Central New York, Howie Hawkins has received the Socialist Party USA nomination for the 2020 presidential race.

“Hawkins’s campaign says that’s one step closer to building a campaign to earn the Green Party endorsement, looking to earn nominations from several parties that range from Progressive to Socialist, uniting the independent left to challenge the democrats and republicans...”

As part of the stated effort to “unite the independent left”, Howie is seeking the Peace and Freedom Party nomination for President of the United States. As such, we run below his bio as printed on the national Green Party website.

Howie Hawkins has been an organizer in movements for peace, justice, labor, the environment, and independent working-class politics since 1967 when he got active in “The Movement” as a teenager in the San Francisco Bay Area.

Howie is a socialist who believes self-organization, independent political action, and international solidarity by the working class and oppressed people for full political and economic democracy is the way to build a society of freedom, equality, solidarity, peace, and ecological sustainability. 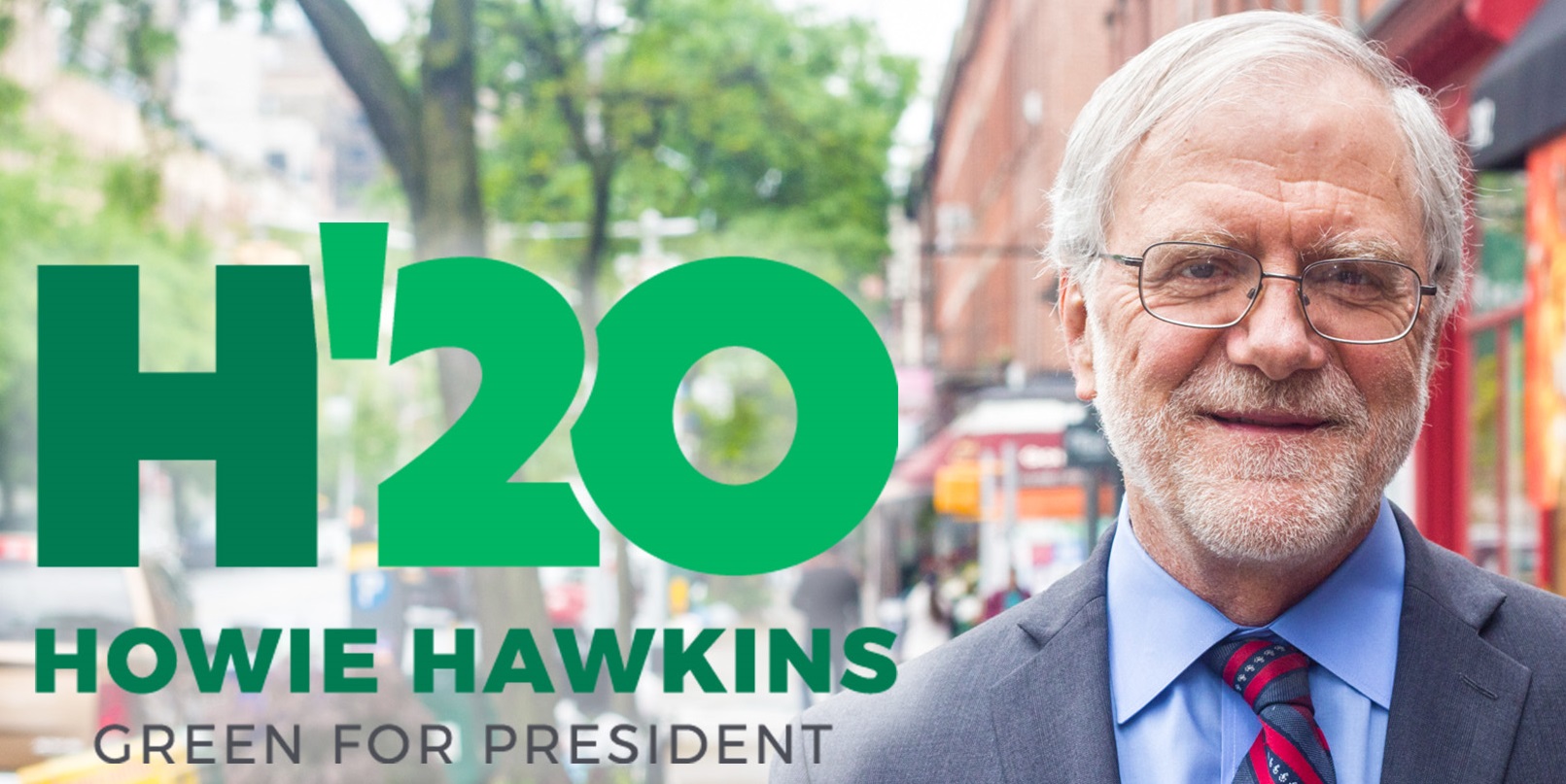 When his draft number was called in 1972, Howie enlisted in the Marine Corps while continuing to organize against the Vietnam War. He remains a member of Vietnam Veterans Against the War as well as a member of the American Legion Dunbar Post 1642 in Syracuse.

After attending Dartmouth College, Howie worked in construction in New England in the 1970s and 1980s. He helped organize a worker cooperative that specialized in energy efficiency and solar and wind installations.

When the Socialist Party of Eugene Debs, A. Philip Randolph, Helen Keller, and Norman Thomas re-established itself in 1973, Howie joined and remains a member. He is also a member of Solidarity, which promotes “socialism from below” and international solidarity because the fight for freedom against all dictators and imperialisms is worldwide and indivisible.

He was a co-founder of the anti-nuclear Clamshell Alliancein 1976 and the Green Party in the US in 1984. In the 1970s and 1980s, he was a leader in the anti-apartheid divestment movement to end US corporate investment in the racist system of oppression and labor exploitation in South Africa.

Howie moved to Syracuse in 1991 to develop cooperatives for CommonWorks, a federation of cooperatives that promoted cooperative ownership, democratic control, and ecological sustainability in the local economy.

Living on Syracuse’s South Side, he has been active in the community on many issues. He is currently Secretary for the Eat To Live Food Cooperative and Treasurer for the Southside Community Coalition. From 2001 through 2017, he worked as a Teamster unloading trucks at UPS. Now retired, he remains a supporter of Teamsters for a Democratic Union, US Labor Against the War, the Labor Campaign for Single Payer Healthcare, and the Labor Notesnetwork.

Howie has been a Green Party candidate for city council, mayor, and auditor in Syracuse. His vote has grown from 3% for at-large councilor in 1993 to 48% for a district council seat in 2011. In 2015, he received 35% of the citywide vote for city auditor.

As the Green Party’s candidate for Governor of New York in 2010 and 2014, he campaigned for a ban on fracking, 100% clean energy by 2030, single-payer healthcare, an end to Governor Cuomo’s test-punish-privatize-and-segregate education agenda, and for progressive taxes and revenue sharing as the alternative to Cuomo’s austerity budgets for schools, cities, and public services. In 2014, he received 5.0% of the vote, the most for an independent progressive party candidate for Governor in New York history except the 5.7% in 1918 and 5.6% in 1920 received by the Socialist Party candidates.

Howie’s articles on politics, economics, and environmental issues have appeared in Against the Current, Black Agenda Report, CounterPunch, Green Politics, International Socialist Review, Labor Notes, New Politics, Peace and Democracy News, Roll Call, Society and Nature, Z Magazine, and other publications. He is the editor of and a contributor to Independent Politics: The Green Party Strategy Debate.