We have 66 guests and no members online

On July 28 of this year the State Central Committee of the Peace and Freedom Party passed a resolution standing in solidarity with Bay Area Rapid Transit (BART) workers and endorsing the BART workers’ slogans:

Since then, although the BART unions are working to prevent another strike, BART management has hired a major union buster to put the workers on strike and then blame them, in a highly visible battle to bring Wisconsin-style attacks to the Bay Area and drive down living standards for all Bay Area workers.

As the following call to action -- circulated to union activists last week -- shows, the Bay Area faces another shutdown on October 11, when the current cooling-off period ends. We hope the public will understand that it is BART management, not the workers, that must take the blame for any strike.

BART General Manager Grace Crunican sits on the Board of Directors of the Bay Area Council, a group of Bay Area CEOs and managers working to bring down wages and working conditions for all of us. Help strategize and organize to beat back the Wisconsin attacks in the Bay Area.

When BART workers went on strike July 1, the whole Bay Area was affected. BART unions are doing what they can to prevent another strike, but BART has hired a major union buster to put the workers on strike, then blame the workers in a highly visible battle to bring Wisconsin-style attacks to the Bay Area and drive down living standards for all Bay Area workers. The 60-day cooling off period expires Thursday, October 10 at midnight, yet BART management still refuses to negotiate, likely forcing the workers out again after that.

BART management is following suit with other bosses who try to pit the people who rely on public services against those providing the public services. BART cried poor and pressured workers to give up major concessions for the last eight years, though it was discovered BART had tens of millions in surpluses. BART's records now show a $125 Million annual surplus, but they believe they can generate enough public hostility against the workers or keep them out on strike long enough that they are forced once again to take major concessions.

This struggle is not just about BART. We’ve seen the same attacks on the city workers of Oakland, Hayward, San Francisco, at the Oakland airport and Port of Oakland, and throughout the area. Workers who are more vulnerable – those without unions, or undocumented workers – face even greater struggles. The plan to close City College of San Francisco adds to attacks on current faculty and staff jobs by denying access to education and jobs for many future workers. BART workers represented by ATU 1555, SEIU 1021, and AFSCME 3993 invite all affected by and concerned with these struggles to help plan and organize to unite these fights against Wisconsin-style attacks and to defend decent jobs for the Bay Area.

For more on the BART workers, see 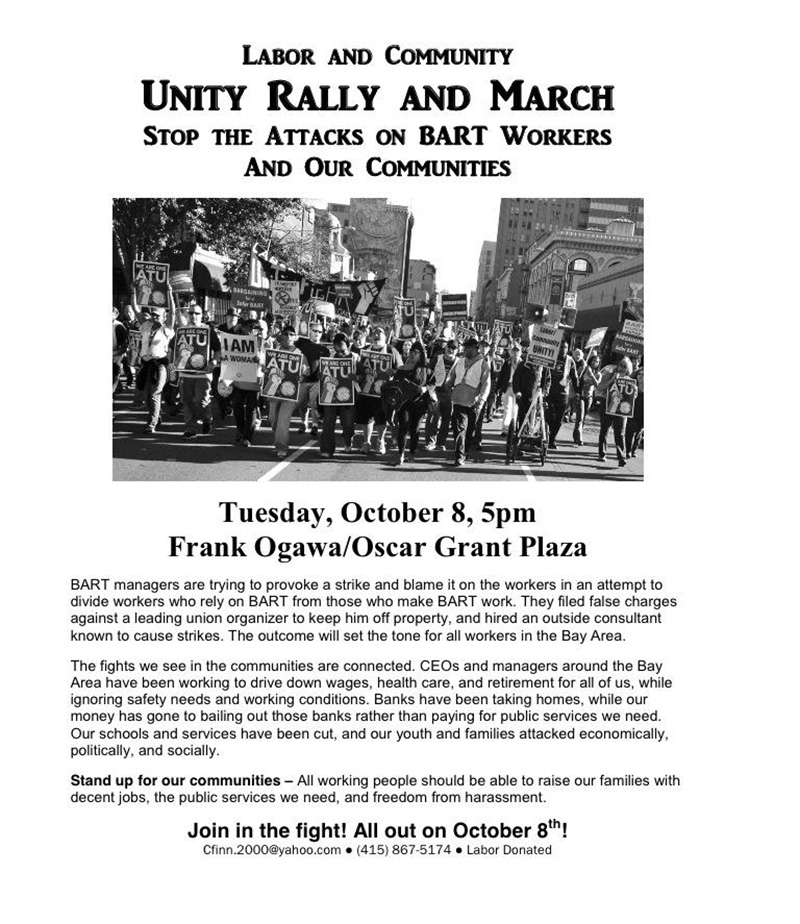