We have 119 guests and no members online

by Dave Kadlecek; this article was originally published in Partisan issue no. 25, printed May 2008. 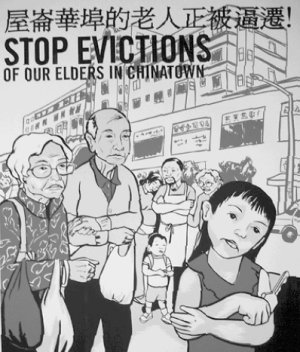 On March 20, 2008, the "Stop Chinatown Evictions Coalition" (SCEC) celebrated victory. After nearly five years of legal and political maneuvers, the developer of the Pacific Renaissance Plaza agreed to a settlement that will preserve affordable housing in Oakland's Chinatown.

In April 2003, developer Lawrence Chan gave eviction notices to over 40 mostly elderly, low income tenants in the affordable housing component of the mixed-use complex in Oakland's Chinatown, so he could sell the units as marketrate condominiums. In response, housing activists joined with Chinese community groups to demand that the tenants be allowed to stay and that the units be preserved as permanently affordable housing.

When they found that tenants had been overcharged $2 million on their rents and that the city had been tricked into forgiving a $16 million debt, Oakland politicians joined them in a lawsuit. (For more details, see Partisan #20.)

After three years of depositions and motions, one tentative settlement was reached on the eve of the scheduled trial in late 2006. The city was to buy all of Chan's remaining interest in the complex for a set price, then resell the commercial space for enough to cover their costs, allowing the 50 affordable housing units to remain as permanently affordable rentals. This deal fell apart when the city couldn't get a high enough price for the commercial space.

The shell game
In spring of 2007 it looked as if there would be a trial, with the key issue being whether transferring the Pacific Renaissance Plaza ownership from an entity ultimately owned by Fu Investment Company Limited to one ultimately owned by International Hotelier Limited was a real sale or just a corporate shell game to cheat the city of Oakland out of its loan. Both privately held corporations, after going through several levels of intermediaries in Caribbean and Channel Islands tax havens, have almost all shares owned by Lawrence Chan's father, Chan Chak Fu.

Twenty years ago, the Hong Kong-based Chan family invested in the U.S. in anticipation of the return of Hong Kong to "Red China". However, now that the People's Republic seems to have embraced capitalism, they're liquidating U.S. investments and concentrating on China's rich coastal provinces. They'd already sold hotel properties in San Francisco, Oakland and Hawaii, and Larry Chan may have settled just to avoid delaying his move from Hillsborough to Shanghai.

The 50 existing units will be sold as affordable moderate-income condos (which can't be resold at market rates for 45 years), with a lifetime lease for the one remaining tenant. These sales, after paying off the purchase loan and the city's legal bills, will raise enough money to develop approximately the same number of permanently affordable rental units nearby. The city approved the settlement in September 2007, and the sale to EBALDC closed at the end of 2007. The sale of the affordable condos will begin soon, but it will be several years before the replacement rental units are available.

Dave Kadlecek is Alameda County Chair of the Peace and Freedom Party.