by Mumia abu-Jamal; this article was originally published in Partisan issue no. 25, printed May 2008. 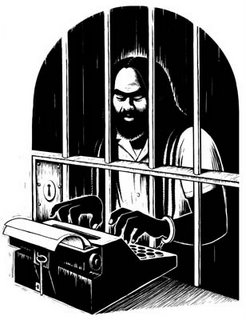 The recent quasi-controversy over the comments made by the Rev. Dr. Jeremiah Wright, retired pastor of the United Church of Christ, to which Sen. Barack Obama (D.IL), both belongs and attends, has shown us how limited, and how narrow, is this new politics peddled by the freshman Senator from Chicago.

Although first popularized via the web, the Reverend's comments caused Sen. Obama to say he was "appalled" by them, and he has repudiated such remarks as "offensive."

Just what were these comments? As far as I've heard, they were that Sen. Hilary Clinton (D.NY) has had a political advantage because she's white; that she was raised in a family of means (especially when contrasted with Obama's upbringing); and she was never called a nigger.

Sounds objectively true to me.

Rev. Wright's other remarks were that the country was built on racism, is run by rich white people, and that the events of 9/11 was a direct reaction to US foreign policy.

And while we can see how such truths might cause discomfort to American nationalists, can we not also agree that they are truths? Consider, would Sen. Clinton be where she is if she were born in a Black female body? Or if she were born to a single mother in the projects? As for the nation, it may be too simplistic to say it was built on racism, but was surely built on racial slavery, from which its wealth was built. And who runs America, if not the super rich white elites? Who doesn't know that politicians are puppets of corporate and inherited wealth?

And while Blacks of wealth and means certainly are able to exercise unprecedented influence, we would be insane to believe that they 'run' this country. Oprah, Bob Johnson and Bill Cosby are indeed wealthy; but they have influence, not power. The limits of Cosby's power was shown when he tried to purchase the TV network, NBC, years ago. His offer received a corporate smirk.

And Oprah's wealth, while remarkable, pales in comparison to the holdings of men like Bill Gates, or Warren Buffet.

Would George W. Bush be president today if he were named Jorje Guillermo Arbusto, and Mexican-American? (Not unless Jorje, Sr. was a multimillionaire!)

In his ambition to become America's first Black president, Obama is in a race to prove how Black he isn't; even to denouncing a man he has considered his mentor.

As one who has experienced the Black church from the inside, politics and social commentary are rarely far from the pulpit. The Rev. Dr. Martin L. King spoke of politics, war, racism, economics, and social justice all across America. His fair-weather friends betrayed him, and the press condemned his remarks as "inappropriate", "unpatriotic", and "controversial."

Rev. Dr. King said the US was "the greatest purveyor of violence" on earth, and that the Vietnam War was illegitimate and unjust. Would Sen. Obama be denouncing these words, as the white press, and many civil rights fi gures did, in 1967? Are they "inflammatory?"

Politics is ultimately about more than winning elections; it's about principles; it's about being true to one's self, and honoring one's ancestors; it's about speaking truth to power.

It can't just be about change, because every change ain't for the better!

Column copyright Mumia Abu-Jamal 3/15/08. Mumia Abu-Jamal is a Pennsylvania radical journalist imprisoned since 1982 after being falsely convicted of killing a police officer. For the latest on the struggle for justice for Mumia, go to http://freemumia.org. This column may be freely republished. The only requirement is that you run it unedited, with every word intact, including copyright information, and send a copy of the publication to: Mumi Abu-Jamal, SCI-Greene, 175 Progress Drive, Waynesburg PA 15370