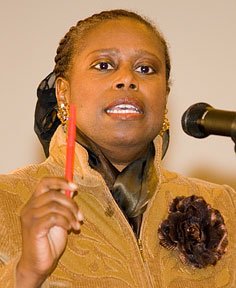 McKinney served 12 years in the US Congress, as a courageous voice for the voiceless, speaking truth to power.

Cynthia McKinney is running a campaign to build a broad Power to the People Coalition which brings together Peace and Freedom voters, Greens, the Reconstruction Movement and traditionally disfranchised communities.

As President, Cynthia McKinney would dismantle the military industrial complex and free hundreds of billions of dollars to promote the real foundation of a healthy economy -- a healthy, Green energy and transportation infrastructure and other public works, affordable housing, universal single-payer health-care and education.

Cynthia McKinney authored a living wage bill in the 109th Congress. As President, she will lead the way in fighting for a living wage in the United States.

Cynthia McKinney has shown real leadership in the fight against corporate globalization. She supported the No Tax Breaks for Runaway Plants bill, the TRUTH Act, requiring disclosure of corporate subsidiaries overseas, and the Corporate Responsibility Act, to enforce corporate compliance with US environmental and labor standards and the Corporate Welfare Reduction and Job Preservation Act.

She has long been in the forefront of work for police accountability to our communities. She has championed the Right of Return for the Internally Displaced scattered from the Gulf Coast by the forced removal of those victimized by Hurricanes Katrina and Rita. She advocates public policy responses to address the racial disparities in wealth, income and opportunities.

As President, Cynthia McKinney would bring the Finance, Insurance and Real Estate sectors under control, not only by stemming the wave of foreclosures, but also by reversing the tide of deregulation of Wall Street which has fueled this crisis redistributing workers wealth into bankers hands.