We have 22 guests and no members online

by Bob Maschi;this article was originally published in Partisan issue no. 25, printed May 2008. 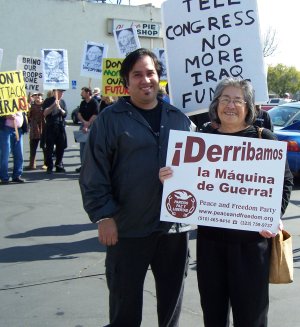 American diplomats are moving into their new embassy in Baghdad. The 104 acre parcel boasts over 20 buildings, tennis courts, shopping mall, cinema, its own power and water systems, a gym and swimming pool. The largest embassy on the planet, it cost US taxpayers 700 million dollars, and will have a yearly budget of over a billion more - money allocated by the votes of Republicans and Democrats in Congress.

Does it sound like they ever intend to leave Iraq?

The rulers of the US plan to occupy Iraq and the region for a very long time. Whether a Democrat or Republican is elected President, and whichever of the two major parties controls Congress, as long as the region has oil and as long as the two corporate parties dominate our government, they will keep US troops in harm's way in the Middle East.

Bush and his Republicans began the war with the backing of almost all congressional Democrats. It is only with the Democrats' support that Bush has been able to continue this war. Though some major-party presidential candidates say they want to change this, they all proclaim their willingness to do whatever is needed to "defend America's interests" - which really means corporate interests, not the needs of the American working class.

This is because Big Oil (and other multinational corporations that manipulate our politics and economy) must have a steady supply of energy. While Iraq has substantial oil reserves, it is much more important for its location. From Iraq, American power can dominate the overland routes, pipelines and shipping lanes that transport a tremendous amount of the world's oil. It can bully (or invade) neighboring Syria and Iran, and project power into the Persian Gulf, through which almost one-quarter of the world's oil supply is carried. Iraq is also in strategic proximity to the newly formed and relatively unstable states forming Russia's southern border - where additional supplies of oil and gas are abundant and networks of pipelines are planned. So is Afghanistan.

As long as war is more profitable than peace and as long as we live in a corrupt, "free-market" society where corporations can make more money with oil than with solar, wind and other renewable resources, these global chess games will continue. Republicans will make outrageous claims that this war and future wars are about terrorism or patriotism. Democratic Party leaders will chant that they want peace as they stuff their pockets with oil company donations and vote to send more young people into battle.

Modern war is not really a conflict between nations. Usually, it is a brutal battle waged by corporate controlled governments against ordinary people who are in the way of extraordinary profits. Mobilizing opposition to war and exposing the corrupt warmasters through demonstrations, direct action and education, can impede or even stop particular wars - especially when the armed opposition is fi erce. But the only way to break the cycle of power politics, war and the institutionalization of corporate greed is to build a large socialist third party. Toward that end, readers of the Partisan are invited to join and help build the Peace and Freedom Party.

Bob Maschi is a member of the San Bernardino County Peace and Freedom Party Central Committee.