We have 49 guests and no members online

by Marsha Feinland; this article was originally published in Partisan issue no. 22, printed January 2007.

Do you think we need a publicly funded school system to teach our kids "reading, writing and arithmetic"? To prepare them to be productive citizens and technological innovators? We need to increase funding and fix social conditions to make schools work. But the current crop of school "reformers" seem to be more interesting in looting the system than improving it.

On December 9, 2006, the Oakland Education Association (OEA) held a public forum on "The Crisis in Public Education." Oakland teachers and other community members took a critical look at the so-called "school reform" movement, examined school funding, and discussed other problems which affect all students, but hit low-income and "minority" families the hardest.

"We need to get our schools back," declared Harold Berlack, an educational researcher and Oakland resident. Berlack said that people need to speak out to change the "No Child Left Behind" Act (NCLB) as it comes up for reauthorization this year. He denounced scripted reading programs and standardized testing as "junk science," and noted that Bill Clinton tried to establish national testing in the "Goals 2000" bill, but was defeated through the efforts of the Congressional Black Caucus.

The No Child Left Behind Act of 2002 is the latest modification of the Elementary and Secondary School Act of 1965. The original ESEA was designed to equalize resources between rich and poor, black and white, so it is something we want to preserve. The problem is that NCLB imposes strict standards, prescribed curriculum and a draconian testing program.

Corporate executives and capitalist economists support these "reforms" as a way to attack the "educational establishment" (read, teachers' unions and anyone concerned with child development) and turn our schools into a "profitable industry" (privatization). "Liberal" Democrats like California representative George Miller, the new chair of the House Education Committee, partnered with George Bush to create and pass this program.

Oakland School Board member Dan Siegel zeroed in on the current struggle between public and corporate control of Oakland schools. The state took over Oakland public schools in 2003, seizing all authority from the elected board and handing it to an appointed administrator, Randolph Ward. State Senate Democratic leader Don Perata pushed the takeover through the state legislature, blocking efforts by the district to cover an unexpected deficit (which had gone through previous county audits undetected) by switching revenue categories.

Ward took over not only the budget, but all education decisions. According to Siegel, "Our kids have been subject to social experimentation" because of Ward's imposition of a corporate curriculum and system. Ward just left Oakland with a larger debt than it had when he came three years ago. Watch out San Diego! Randolph Ward is your new county superintendent of schools.

The looting of Oakland's schools hasn't ended with Ward's departure. State Superintendent of Public Instruction Jack O'Connell and State Senate leader Don Perata are insisting that the Oakland district sell off nine acres of property to get out of debt. The designated land is a prime parcel which currently houses district offices, three schools and two child development centers. Since the School Board has no say-so, the only thing stopping the deal is a dispute over which developers get the property -- the pals of Don Perata or the pals of Jaack O'Connell.

The name Randolph Ward appeared appeared again in a panel on school finances. Oakland teacher and Peace and Freedom member Bob Mandel described how Eli Broad, the Business Round Table school "reform" mastermind, flew Ward to New Orleans to write legislation after Hurricane Katrina. The result: the 123 New Orleans public schools were reduced to 20 (and are now down to 5). Seven thousand teachers were laid off. Unfunded charter schools replace the dismantled system. So who is served by the plans for a shiny new New Orleans?

Mandel is part of OEA's movement to get Oakland's wealthy corporations to help finance the schools. He pointed out that the Port of Oakland does $33 billion in business every year. Just one percent of that could fix the schools and the city. Two percent could do that and also restore the county hospital and other county systems.

This is not a proposal for an "adopt-a-school" program. According to OEA's official statement, "We are no longer chasing the mirage of soft money, of one-time corporate 'grants' with strings attached. To provide and maintain quality public education, corporate wealth must tapped on a regularized, sustained basis and controlled by the staff, parents and students in the school community."

Oakland is not the only district struggling for public control of public schools. Los Angeles mayor Antonio Villaraigosa got the state legislature to let him take control of L.A. schools from the elected school board. On December 21, a Los Angeles County Superior Court judge ruled that the power shift was unconstitutional. But Villaraigosa is not giving up, and Los Angeles teachers, students, parents and community members are organizing for a struggle.

Marsha Feinland taught in public schools for more than 30 years. 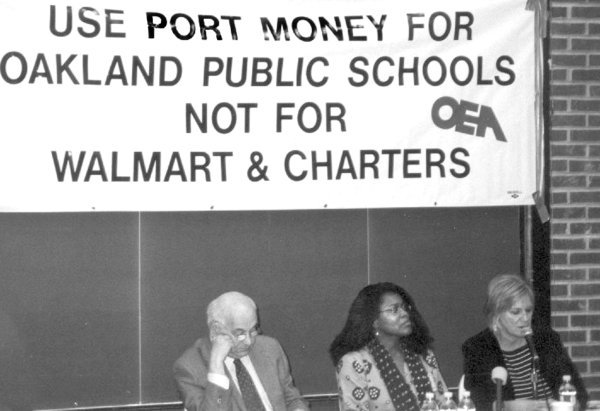