We have 24 guests and no members online

Ricardo Romo was the Peace and Freedom Party's first candidate for Governor of California (1970).

From the Peace and Freedom Newsletter of October 1970: 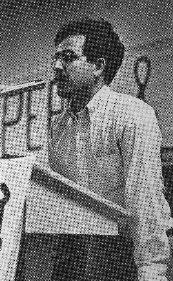 "Since 1968, Romo has been organizing to involve Chicanos in movement activities. Romo sees the day when Chicanos and Blacks will join Whites who are dissatisfied with the Democrats and Republicans under the banner of "Peace and Freedom, a humanistic party for th oppressed".

"Romo's involvement in La Raza causes has been long and intensive. While attending college he helped organize food caravans and other supportive activities for Cesar Chavez' United Farm Workers strike. He also served as press secretary for Reies Tijerina, helping to bring the Land Question of the Southwest to national attention. Romo has traveled widely in Canada and the Southwest with Tijerina organizing greater Chicano and Indian unity and was instrumental in establishing the Chicano Conference in California.

"A significant development of his campaign has been his winning of the endorsement of the statewide Mexican American Political Association (MAPA). For the first time in its ten year history, MAPA passed over Unruh, the Democrat, to support the first Chicano candidate for governor in this state under the American flag. Romo's candidacy for governor is based on his desire "to effect a political consciousness within the Chicano community; to build and sustain an ongoing third alternative to the existing, established parties; TO BRING ABOUT A HUMANISTIC REVOLUTION!""